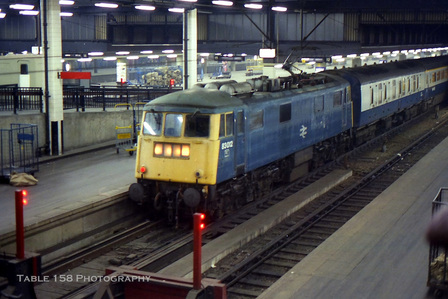 Relegated to empty stock moves between Willesden and Euston 83012 stands on the blocks at Euston station.

From an original fleet of 15 locomotives 83009, 83012 and 83015 would continue until withdrawal in 1989 on these stock moves. In addition from a fleet of just 10 locomotives 82005 and 82008 would also see out there final years on the Willesden to Euston circuit, although they would be withdrawn two years ealier during 1987. 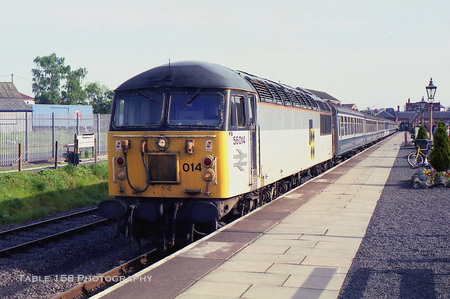 The ever popular Severn Valley Railway diesel gala and visiting mainline locomotive 56014 stands at Kidderminster Town with the 09:50 to Bridgnorth.

One of the original Romanian built Class 56's from 1976 56014 was withdrawn during June 1993 - just over a year after appearing at the Severn Valley diesel gala - with final disposal coming just under seven years later during April 2000 at Immingham. 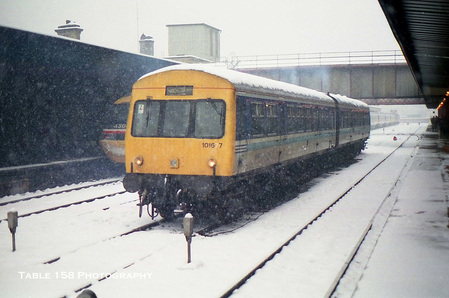 Very wintry conditions at Sheffield as 101677 chugs away on
Up Station Siding No. 2. 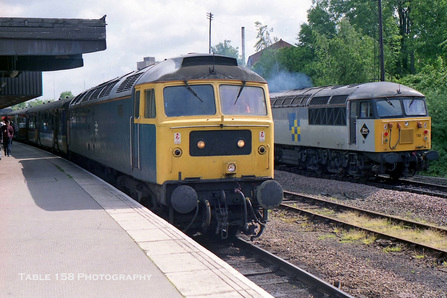 Preserved in January 1994 by The Brush Type 4 Fund and based at the Gloucestershire Warwickshire Railway is 47105 seen here at Peterborough.

Carrying the unofficial painted name - courtesy of Tinsley depot - Goldcrest is working 1L93 0847 Birmingham N.S - Yarmouth as it stands alongside 56110. 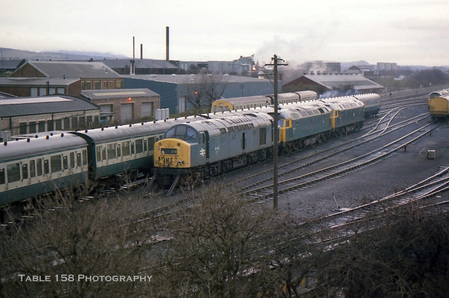 Withdrawn on the 14th December 1982 40162 was left dumped at Haymarket depot for over two years until it was moved to Millerhill yard on the 26th June 1985 where it was finally scrapped.

Note the blanked off cab door window on 47040 which was quite unusual for a Class 47. Shortly afterwards 47040 would become ETH conversion 47642 Strathisla and then RES 47766 Resolute. Like the Class 40 it to would eventually be scrapped.

47017 also suffered the same fate and was finally scrapped on the 28th February 1992 at Booths of Rotherham. 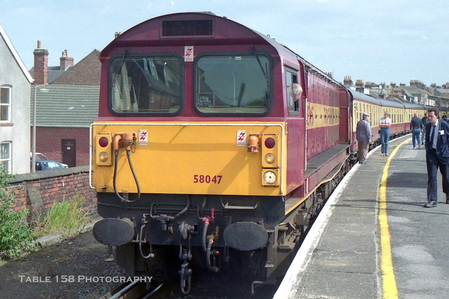 Well I think it is fair to say that not too many Class 58's made it to Weymouth.

Here 58047 stands at Weymouth with the Worksop Open Day Committe's The Worksop Wessex Wanderer 1Z59 16:13 Weymouth - Worksop. At the other end of the train (out of sight) is 58039 which would run-round at Dorchester South, the train then being double-headed by both locomotives from there onwards, this being due to restrictions on a bridge.

The last of the class to be withdrawn it came on the 4th September 2002 at Old Oak Common for 58047. This was to become one of the Class 58's sent to France and Spain, it currently remains in Spain. 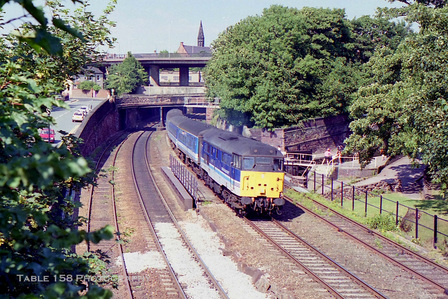 Getting away from Chester and passing over the Shropshire Union Canal - and the Northgate Locks - having emerged from the 218 yard long Northgate Street Tunnel is 31421 Wigan Pier hauling 1D45 15:12 Manchester Victoria - Llandudno Junction. 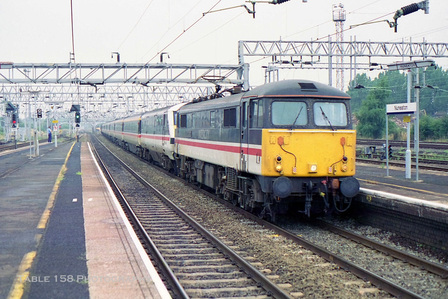 Introduced during August 1973 87005 City of London is seen running into Nuneaton on a Euston bound service.

Unlike some of its classmates which have either been preserved, exported, or are still in storage this 87 was scrapped during 2005 at MoD Caerwent. 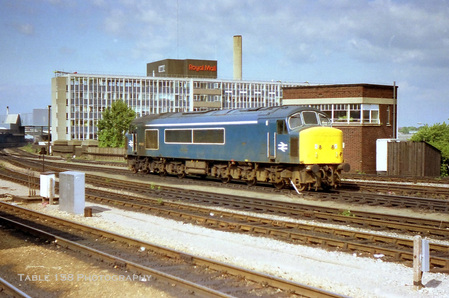 There was always something rather fascinating about standing at the end of the platform at Bristol Temple Meads watching the comings and goings on the adjacent Bath Road depot.

In the twilight of its railway career 45013 shunts on Bristol Bath Road depot. It would be withdrawn from service during April 1987 but not before recieving the unofficial painted name of Wyvern by its home depot of Tinsley.

Behind the locomotive stands the former Bristol Temple Meads Loco Yard box. A GWR Type 18 box that opened on the 9th December 1934 housing a GRS "D" pattern power frame of 32 levers, it was to close on the 17th March 1970, however the structure remained in use to monitor movements around the depot. 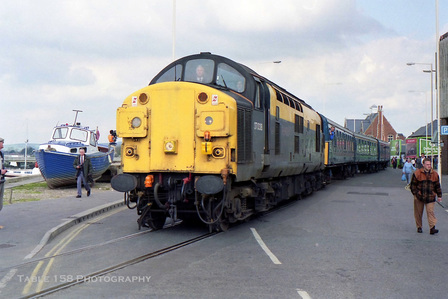 History in the making as the first Class 37 to traverse the Weymouth Quay tramway makes its way along Commercial Road towards Weymouth Quay.

Top and tailing 4TC No.410 with 73109 Battle of Britain out of sight on the rear is dutch liveried 37038 which was being used to test the class on the branch ahead of a planned summer (1993) service from Yeovil to Weymouth Quay.

Amazingly this locomotive is still in use with DRS and can still be seen around the national network on a regular basis often on test trains and nuclear flask train. 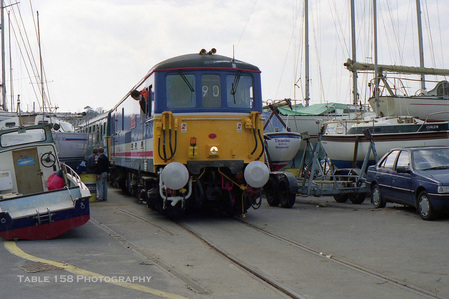 After a gap of over three years the first train to traverse the Weymouth Quay tramway since December 1989 ran using 73109 Battle of Britain top & tailing 4TC set No. 410 with
37038 (out of site to the rear).

This would be a test run for the Class 37- a class of locomotive  which had previously not worked the tramway - and would lead to a regular service during the summer of 1993 using Class 37's running down from Yeovil.

Here 73109 Battle of Britain negotiates its way along Commercial Road through the boats on the return test run back from Weymouth Quay.

Note the headcode - 90 - which use to be for the Channel Islands Boat Train from Weymouth Quay to Waterloo. 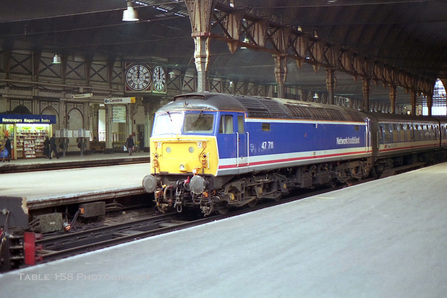 Pure coincidence this shot was taken dead on midday as ex-ScotRail machine 47711 (ex Greyfriars Bobby) stands on the blocks at Paddington under the magnificent Brunel train shed.

The locomotive would eventually receive the nameplates of County of Hertfordshire which had been previously carried by 47583. 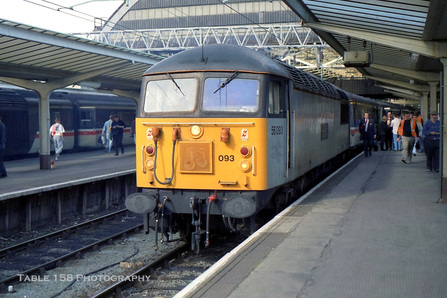 Pathfinder Railtours two day tour The Lancastrian '94 tour operated around the North West with a variety of traction, those within the railtour community referring to such a tour as a 'spin and win' tour.

56093 was withdrawn during July 1999 although it was a further eleven years before final disposal in October 2010. 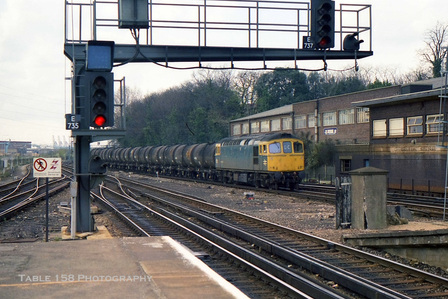 Many a great photograph has been taken here at the west end of Southampton station with its large and imposing semaphore signal gantry controlling and protecting moves along the Down Fast and Down Slow lines, sadly for me though i missed it by just a few years.

The DC headcode on the Class 33 indicated this was to / from Fawley for the Eastern Region via Chertsey and Channelsea Junction. 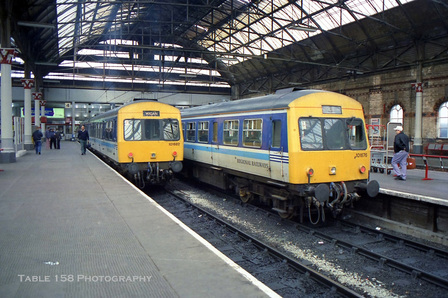 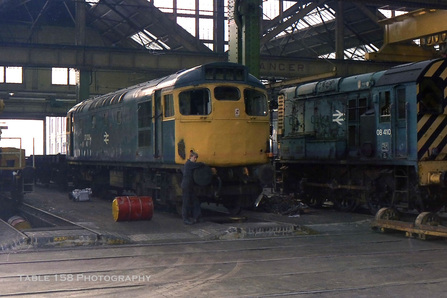 The end to a relatively long career with British Rail approaches for 27028 (ex D5375) which had been withdrawn during August 1984. Here it is seen inside Swindon Works for component recovery, and eventually scrapping six months later.

The Class 27 was introduced during 1961/62 with 69 examples being built by the Birmingham Railway Carriage and Wagon Company (BRCW). The final 27's were withdrawn during 1987 with 27008 working until withdrawal on 19 August 1987. There are eight members of the Class 27 preserved.

08410 however is still in use, and operated by First Great Western from Long Rock at Penzance, where it hauls the Night Riviera sleeper empties to and from Penzance station to the nearby depot. 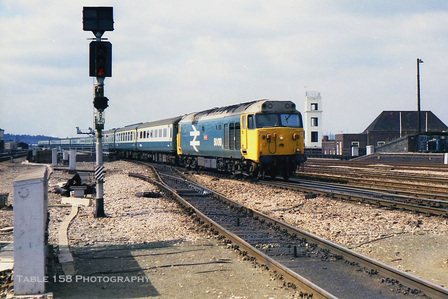 A station that is changing beyond all recognition; Reading.

Ramillies is now one of 18 Class 50's preserved from an original fleet of 50 locomotives based at the Mid Norfolk Railway. 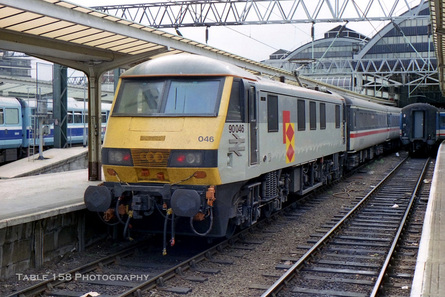 It seemed like an everyday scene, and it was.

However with the rapid decline of loco-hauled passenger trains in the early 2000's services like this one at Manchester Piccadilly would eventually become a thing of the past. 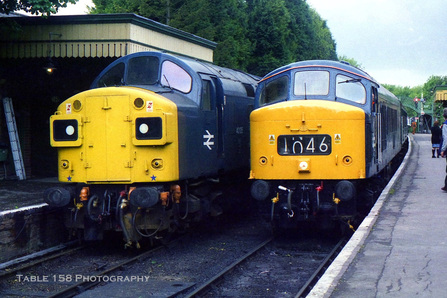 The Class 40 Preservation Society (CFPS) Class 40 No. 40135 stands alongside privately owned 46035 at Alresford during the Mid-Hants Railways 2003 diesel gala. 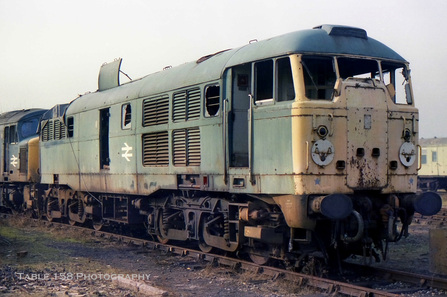 Withdrawn from service during March 1983 due to an engine explosion near Peterborough it would see out its final days here at Swindon before final disposal during July 1986.

The loco had the nickname of 'sticks' for fairly obvious reasons. 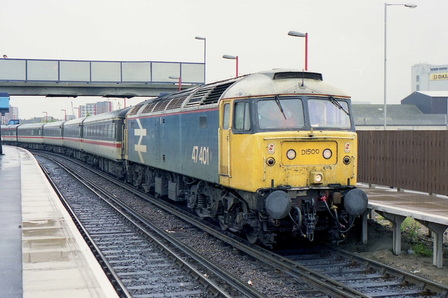 50 years ago on the 28th September 1962 the Brush Type 4 entered service with British Railways. D1500 entered traffic based at Finsbury Park, this first of a production run of 512 locomotives built at Brush of Loughborough, or Crewe Works.

After some thirty years of service the pioneer Class 47 was preserved in December 1994 by the 47401 Project and is based at the Midland Railway Centre. It currently carries its early 1980's livery of rail blue fitted with its North Eastern nameplates and crests. 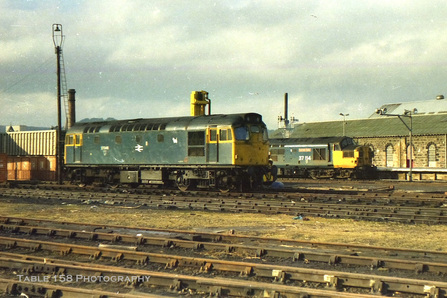 Today this scene is unrecognisable. The site of the sidings now forms part of the Eastgate Shopping Centre and a Morrisons supermarket, and both locomotives; 27048 and 37114 Dunrobin Castle, consigned to the history books. 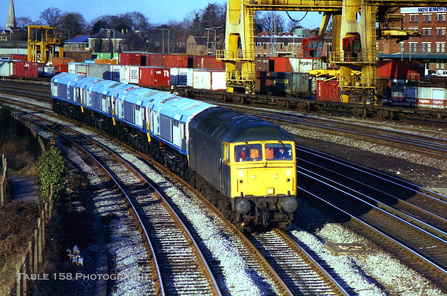 In stark contrast to the four bright silver locomotives it is hauling 47294 has the distinction of hauling four brand new General Motors Class 59's for Foster Yeoman. Here the convoy approaches Millbrook near Southampton having just left Southampton Western Docks and en-route to their new home at Merehead.

Over twenty five years later and the Class 59's still perform the task to which they were originally intended for, working almost without fault on stone trains in and out of the Mendip quarries. 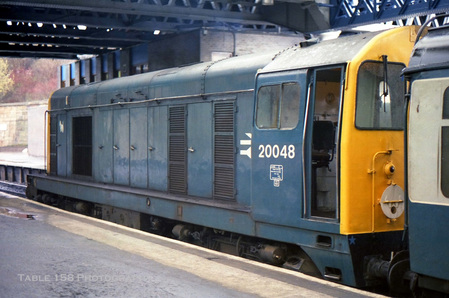 With bonnet leading 20048 stands at Glasgow Queen Street waiting to depart with empty stock up to Cowlairs.

This loco is now preserved and based at the Midland Railway Centre at Butterley. 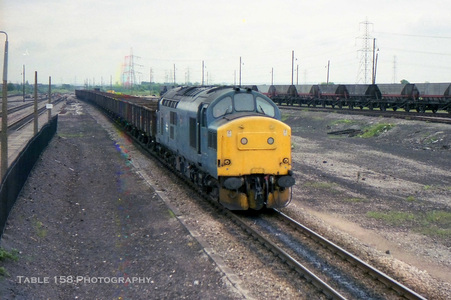 A scene that seems longer ago than it actually was.

BR blue 37182 passes around the back of Severn Tunnel Junction station hauling a rake of vacuum braked 16 ton mineral wagons. Even the relatively modern looking merry-go-round hoppers are now consigned to the history books like everything else in the shot.

Interestingly 37182 was to become 37670 'St Blazey T & RS Depot' and had the distinction of hauling the final Bristol to Weymouth service of summer 2009 (with 37401). The locomotive was also the sole Class 37 to carry the DB Schenker red livery. It has since been purchased by the Harry Needle Rail Ltd and is stored at Barrow Hill.

30 May 1986
To leave a comment on this image click here
Contact
Click the button below to take you to the next GM Free page for more nostalgic images.
GM Free - Page 6
All photographs are the copyright of Table 158 Photography and should not be
reproduced by an individual, or organisation, without prior consent.
©