A celebration of fifty years of the Class 47 introduced by British Railways on the 28th September 1962. 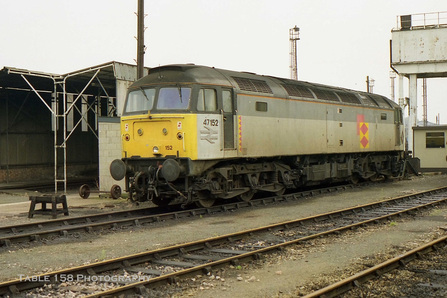 Trainload distribution's 47152 is stabled at Oxford between duties.

122 Class 47's carried these markings, each sector decal differing on a basic two tone grey livery. A nice touch to the livery was the addition of cast BR double arrows and depot crest. 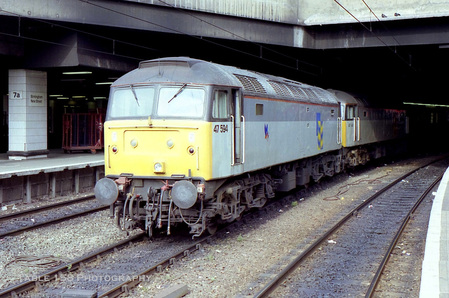 Can you believe this locomotive is still pounding Britain's rails on a regular basis?

What was to become a rare locomotive on passenger workings after being placed into the Trainload Metals sector was 47594, of which only five loco's were allocated to the pool.

Under Rail Express Systems (RES) 47594 was to become 47739. On the
30th September 2008 it was named Robin of Templecombe by driver Robin Gould, at Templecombe. The locomotive is now one of three Class 47's operated by Colas Rail. 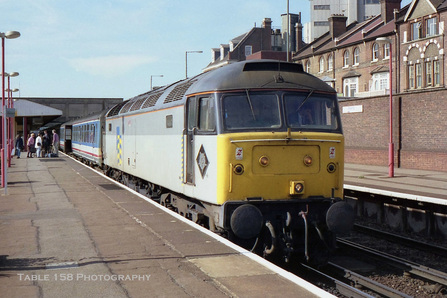 Always considered to be something of a rateable engine was 47085.

Within months of entering traffic in 1965 it was bestowed the name Mammoth, this it would retain until removal in August 1988. Enter the world of sectorisation and customer dedicated traction and the names Conidae and REPTA 1893 - 1993 came and went within a short space of time comparred to the time Mammoth adorned this beast.

Sadly there was no saving this mammoth from extinction when it was officially withdrawn at the start of 2000, having been stored out of service for a couple of years. 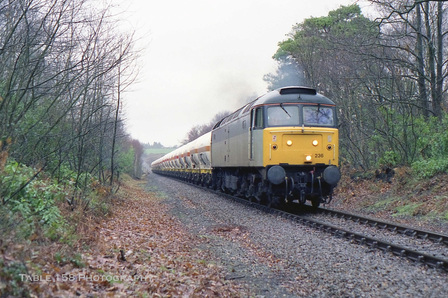 These gas trains finished during 2005, the line remaining in a mothballed condition and now used by occasional charter trains on/off of the Swanage Railway. 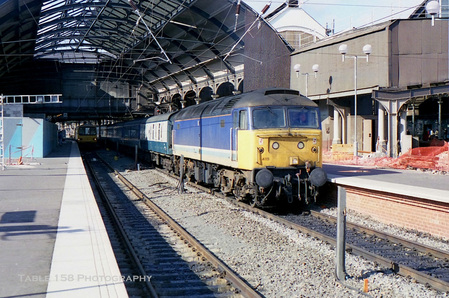 A one off livery was the Regional Railways livery which was carried solely by 47475, here it is seen at Newcastle having worked in on the
07:19 Liverpool - Newcastle trans-Pennine service. 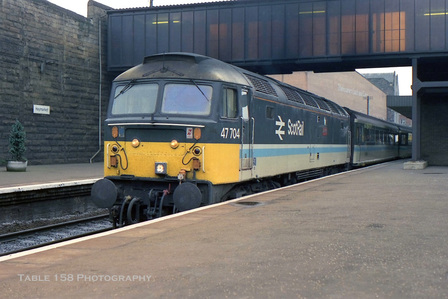 Seventeen push-pull fitted Class 47/7's were created for use in Scotland and introduced during January 1979, although 47713 Tayside Region (ex 47510 Fair Rosamund) was an early withdrawal due to severe fire damage, and an additional locomotive (47717) created as its replacement.

Here one of the originally converted loco's 47704 Dunedin stands at Haymarket bound for Glasgow Queen Street. 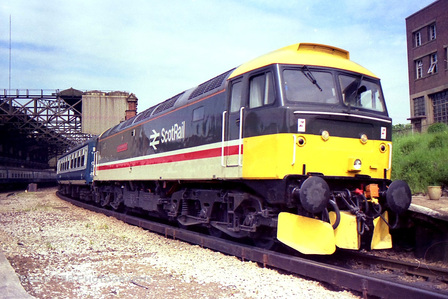 Now numbered 47773 and painted in dual green livery this loco still enjoys occasional runs out on the mainline under the ownership of Vintage Trains. 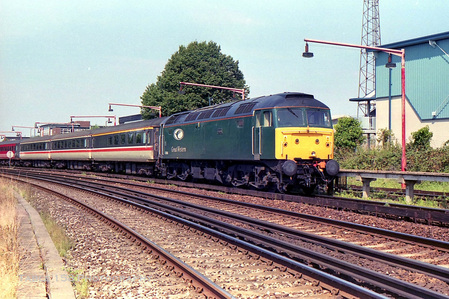 The only occassion of a Great Western green liveried Class 47 to work a Virgin Cross-Country service train onto the Southern is 47846 Thor seen here in the sidings at Poole prior to working Sundays 1S97 15:05 Poole-Glasgow. 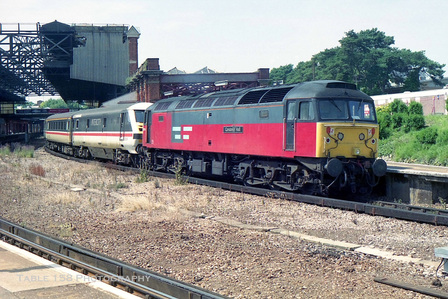 47784 Condover Hall 1M14 14:40 Bournemouth - Manchester vice HST  with WCML DVT set. This was the only known occasion a DVT set worked through to Bournemouth. 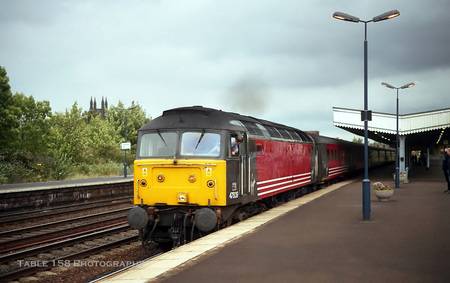 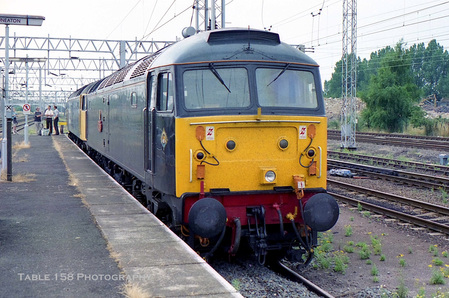 Another well know name to enter into the privatised railway was that of Pete Waterman with his Waterman Railways company.

One locomotive under his new ownership was ex-ScotRail machine
47710 Sir Walter Scott now adorned in a rather attractive lined black livery and renamed Lady Godiva and seen here at Nuneaton. 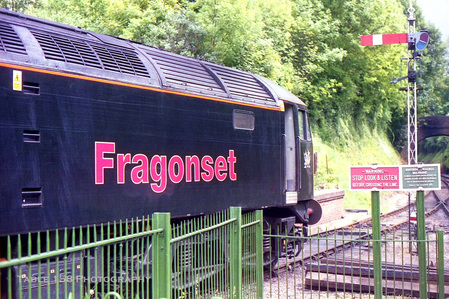 Fragonset liveried 47355 at Alresford during the Mid-Hants Railways 2004 diesel gala.

As D1836 this locomotive was involved in a serious accident on the West Coast Mainline on the 6th October 1971. However it was repaired and returned to traffic after sustaining serious collision and fire damage. 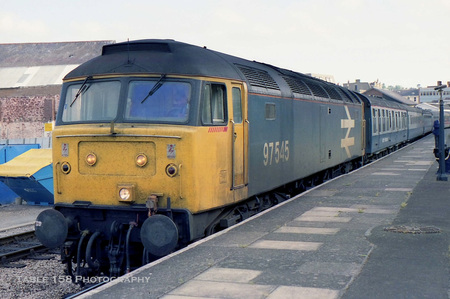 This numbering was short lived and was reclassified back to Class 47, this time the final three digits were changed to reflect their departmental status, 47545 eventually becoming 47972 which was also to become the sole Class 47 to carry the Technical Services livery. Amazingly 47972 still survives albeit in a state of dereliction at West Coast Railways Carnforth depot.

From express passenger to trip freights 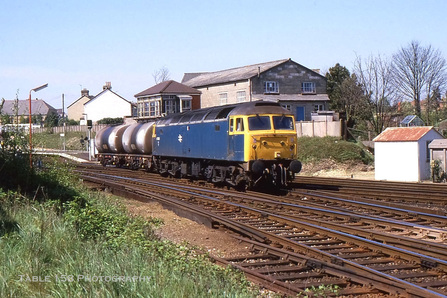 Far from express passenger or postal workings, or heavy long distance freights, the Class 47 was equally at home with local trip workings.

One such working was the 11:52 Hamworthy Goods-Bournemouth T&RSMD which is seen passing over the junction at Branksome with 47289 in charge of two TTA oil tanks. Fuel to Bournemouth depot is now delivered by road.

Although allocated to Tinsley there is no mistaking that Stratford grey roof under the grime.

The end of rail blue is nigh 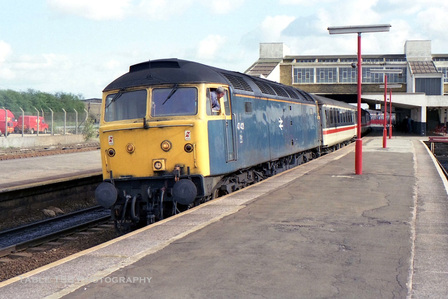 Even though privatisation of British Railways was still four years away rail blue livery was becoming increasingly rare, especially on Class 1 passenger trains. With the introduction of sectoristaion of the railways a decade earlier some locomotives still managed to evade the multi coloured paintbrush.

One such locomotive to always retain rail blue was 47421 seen here at Banbury on Sundays 1M03 15:13 Paddington - Wolverhampton.

Formerly named The Brontes of Haworth 47421 was withdrawn during October 1991, with final disposal during March 1997 at Crewe Works.

What's in a name? 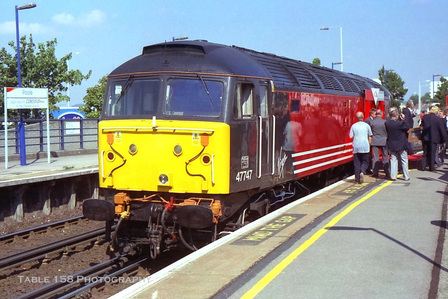 There have been numerous naming's, re-naming's and de-naming of the Class 47 since their earliest days.

One such example was Virgin liveried 47747 just having its forth name Graham Farish unveiled, named after the N gauge model railway manufacturer. 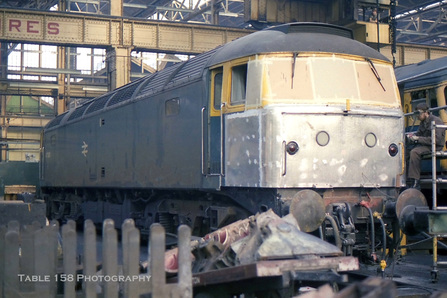 There can't be many locomotives all their working life but Cardiff Canton was the home depot for 47230 during its 24 years before final disposal at Crewe Works during March 1989.

Having been withdrawn from service during January 1987 47230 is seen here two years earlier at Swindon Works recieving a new cab at the No. 1 end following collision damage. This in itself was a rare event as the class were normally sent to Crewe or Doncaster Works for attention or repairs, not Swindon. 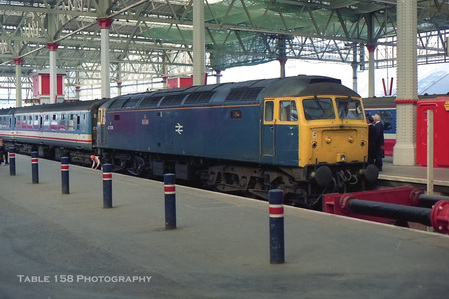 Sheffield's Tinsley depot was renowned for its unofficial names to various classes of locomotives, and Class 47's were no exception.

One such locomotive to recieve an unofficial painted name was
47376 Skylark seen at Waterloo having arrived on 1O30 06:42 Yeovil Junction - Waterloo.

The era of rail blue 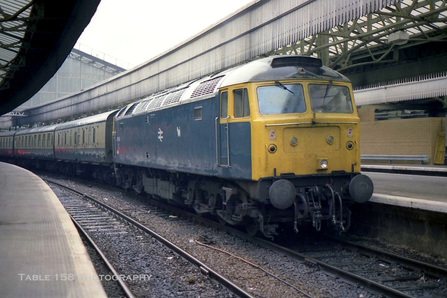 Glasgow Eastfield allocated 47003 stands at Aberdeen with the three coach 2A80 17:40 Aberdeen - Montrose.

From ScotRail to Network SouthEast 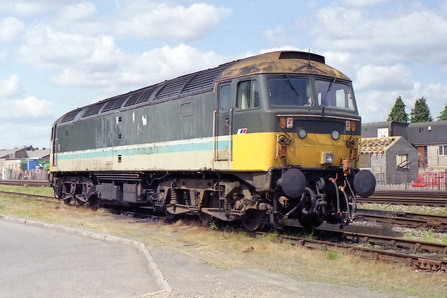 Exiled from ScotRail de-branded 47706 still carries the distinctive yet weary livery of its former sector.

The former Strathclyde is stabled at Salisbury awaiting its next duty with Network SouthEast. 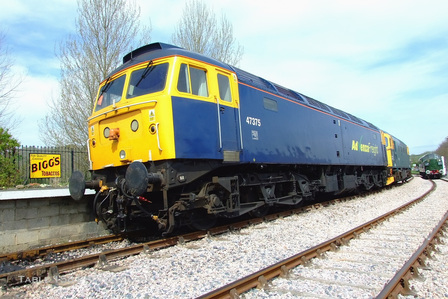 It is amazing that some loco's have managed to survive through the years, whilst many of their counterparts have ended up at the hands of the scrap merchant. One such machine is 47375.

A livery very reminiscent of the old British Rail blue was that carried by 47375 operating for Advenza Freight, seen here at Totnes Littlehempston on the South Devon Railway.

It still sports this livery in 2012, albeit minus the Advenza Freight branding, and the number positioned under the driving cab window. In addition it now carries the name Tinsley Traction Depot. 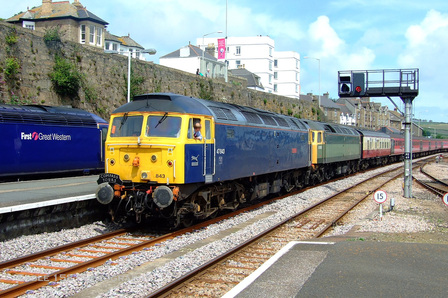 Propelling their train out of Penzance station is Riviera Trains 47812 in dual green and 47843 Vulcan in a slight variation to BR's 'Monastral blue'.

Both loco's are still in service and see very occasional use. 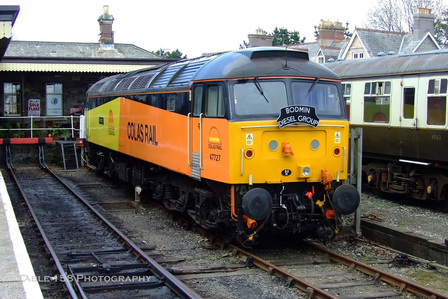 Sporting probably the most colourful livery of all the privatised operators running the Class 47 sees 47727 Rebecca at Bodmin General on the
Bodmin & Wenford Railway during their 2008 diesel gala. 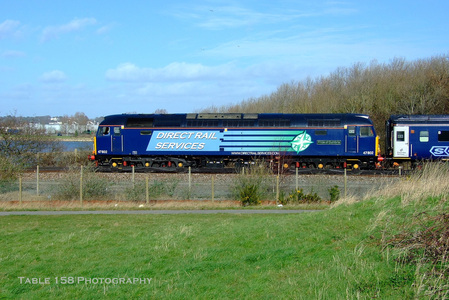 Here 47802 Pride of Cumbria passes Poole with the 'The Thomas Hardy Circular Tour' 1Z86 06:55 Watford Junction - Weymouth formed of the Stobart Pullamn set. The train was due to start from Northampton but due to an overnight incident with a Freightliner the train started from
Watford Junction. 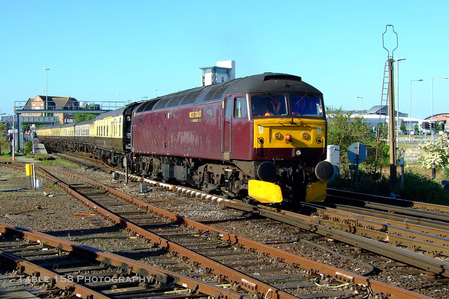 Considered by nearly all photographers as an awful livery to photograph the West Coast Railways maroon livery can look nice if captured at the right angle, and in the right light.

With its snowploughs complementing its appearance 47245 enters Poole sidings on 5Z81 05:45 Eastleigh T&RSMD - Poole with steam loco
70013 Oliver Cromwell on the rear.

30 May 2009
To leave a comment on this image click here
Contact
Click the button below to take you to the next GM Free page for more nostalgic images.
GM Free - Page 1
All photographs are the copyright of Table 158 Photography and should not be
reproduced by an individual, or organisation, without prior consent.
©