A celebration of 50 years of the Class 47 introduced by British Railways on 28 September 1962. 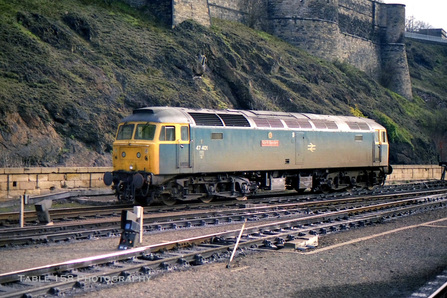 The first of 512 Class 47s to enter service with British Railways.

Stabled at Edinburgh Waverley between duties is 47401 North Eastern.

The locomotive was preserved following withdrawal and is currently based at the Midland Railway Centre, sporting the same livery and style as seen here. 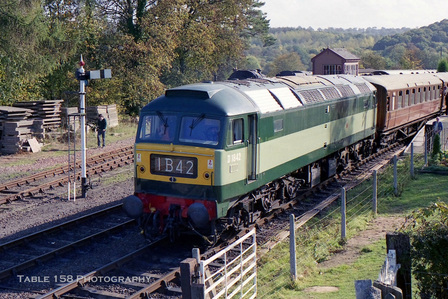 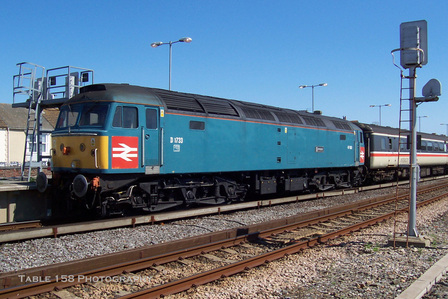 Here, 47853 Rail Express sports its retro XP64 livery - which was introduced by Virgin Trains - at Weymouth, having arrived as the tail end locomotive on NENTA Tours' 1Z45 04:50 Norwich - Weymouth. 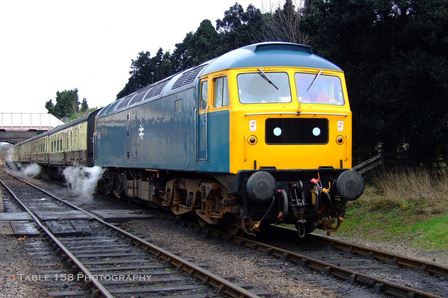 A fine example depicting Class 47s in the mid to late 1970s and early 1980s - as represented by the Brush Type 4 Funds superb 47105 - seen here at the Gloucester Warwickshire Railway at Toddington.

Sporting BR corporate 'Monastral Blue' and glass black dotmatrix headcode panel with no fixed centre headlight, and no roof mounted NRN ariel, this scene with leaking steam heat could be a real timwarp from a bygone era
on the national network. 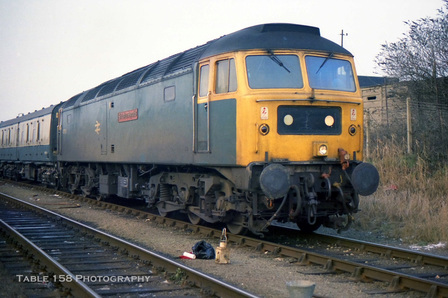 By now, the fixed off-centre headlight was becoming more common with most of the class fitted.

Otherwise, its appearance had not changed at all from the standard all-blue requirement laid down by the British Railways Board. 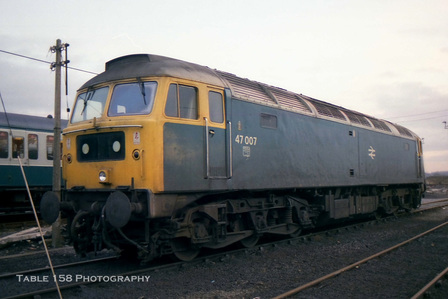 Sporting the trademark grey roof of Stratford is 47007 seen here on Eastleigh T&RSMD.

With the addition of the grey roof, plus the black glass headcode box, this created a nice and visually pleasing alternative to an otherwise bland livery. 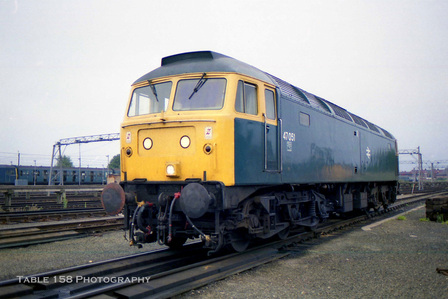 Now looked upon with great fondness by many but, at the time, rail blue was considered 'boring' after having been applied to everything - British Rail sticking rigorously to its policy of a corporate livery.

All that was about to change.

Sporting the corporate livery of 'monastral blue', 47051 stands at Eastleigh T&RSMD between duties. 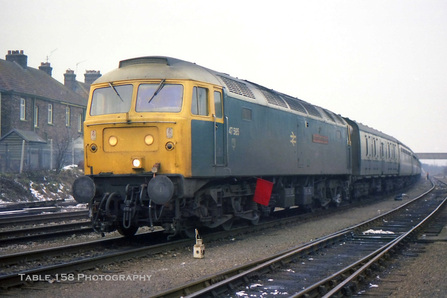 Another example of the Stratford grey roof, this time applied to
47585 County of Cambridgeshire seen here at Poole. 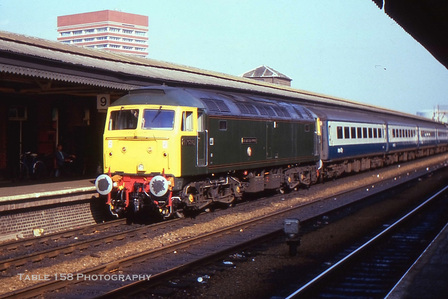 As part of the GWR 150 celebrations, four Class 47s were repainted in lined Brunswick green - and fitted with cast number and nameplates - in keeping with Great Western steam locomotives.

One of the chosen four locomotives, 47628 Sir Daniel Gooch, stands at Reading with Sundays 14:32 Poole - Liverpool. 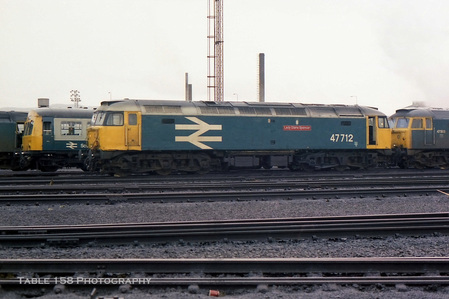 A livery that still looks smart to this day, the ever popular large logo.

First applied experimentally to 56036 during August 1978, it was soon to be applied to other classes including the Class 47. 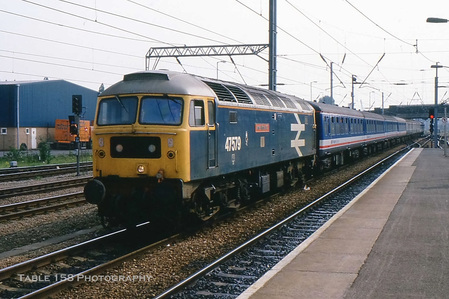 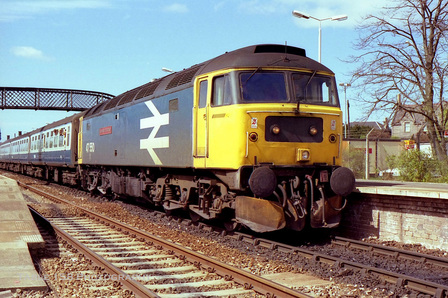 One of the most popular liveries to grace the Class 47 must surely be that of large logo.

However, with the addition of three-piece snowploughs and Highland Rail logos (or Scottie dog) plus painted black headcode boxes, the livery takes on an even more appealing look.

One such locomotive was Inverness-allocated 47550 University of Dundee seen here at Elgin with 1A50 12:00 Inverness - Aberdeen, although it would eventually lose this livery in favour of the revised Inter-City main line livery. 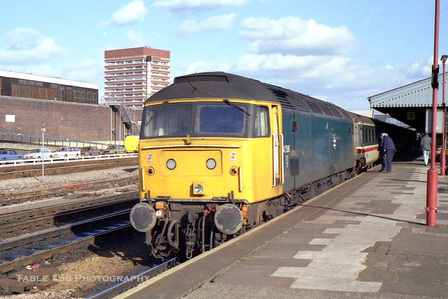 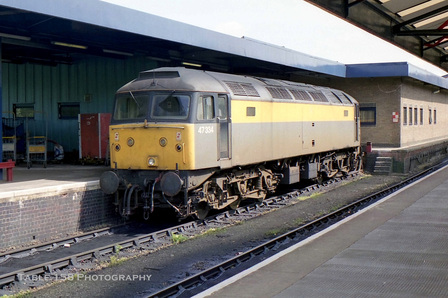 Dutch-liveried 47334 stabled at Oxford between duties. 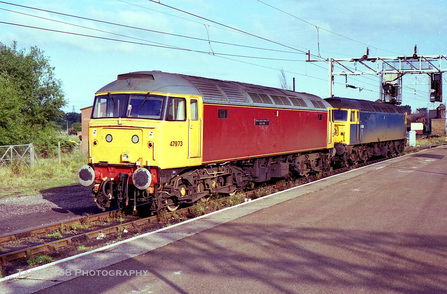 This was the sole Class 47 to carry this rather colourful departmental livery. 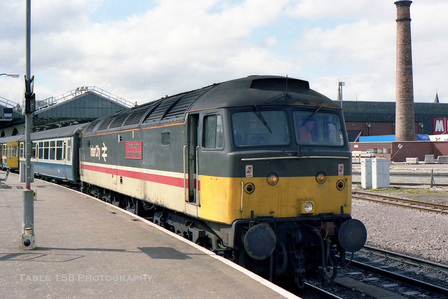 A brief stint allocated to Eastfield for a locomotive more traditionally allocated to the Western Region is 47622 The Institution of Mechanical Engineers seen here at Inverness prior to deaprture with 1T30 12:30 Inverness - Glasgow Queen Street.

New to traffic on 24 March 1964, the then D1726 was to eventually
become twin-tanked 47841 and is still in use under the ownership of
Direct Rail Services (DRS). 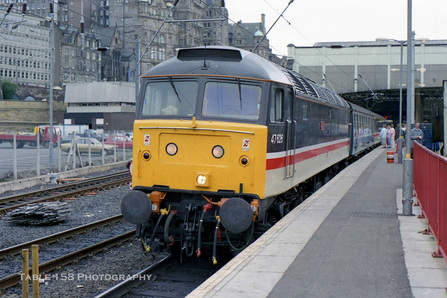 It would also lose its traditional Western Region name in favour Royal Mail Cheltenham, although it would eventually be reunited with its Atlas nameplates. 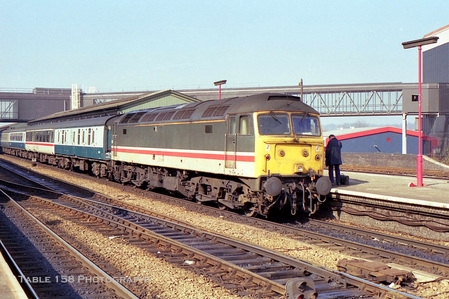 As D1630, this locomotive was severely damaged in an accident on
11 June 1972 whilst hauling a charter.

It was fully repaired and returned to service but eventually consigned to scrap during May 2002 after 38 years service. 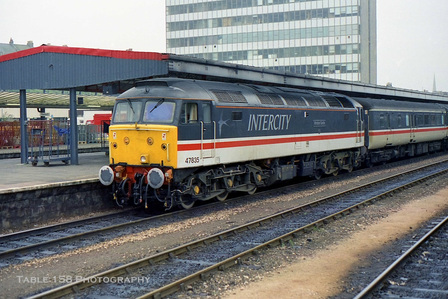 A locomotive destined to become one of the two dedicted Royal Train
Class 47s and re-numbered/named to 47799 Prince Henry.

Back in its Inter-City cross-country days, it was 47835 Windsor Castle seen here at Plymouth hauling Sundays 1A65 12:39 Penzance - Paddington. 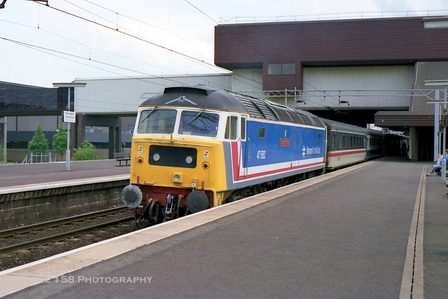 A real breakaway from the more conservative liveries that were starting to emerge at the time was the somewhat revolutionary Network SouthEast livery. First applied to 47573 The London Standard, the locomotive would go on public display at Liverpool Street station for the first time on the 10 June 1986. Wholesale re-branding would follow.

As 47170 County of Norfolk, this machine had the distinction of being the first Class 47 to be painted in large logo livery during 1980. 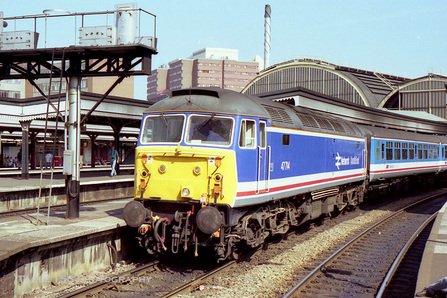 A pleasant revision to the original Network SouthEast livery as seen on 47714 at Paddington with 1F36 16:15 Paddington-Oxford.

Having the distinction of being the first 47/7 to be transferred south from ScotRail after push-pull services were replaced by sprinter units, this locomotive can now be found at the Old Dalby test track. 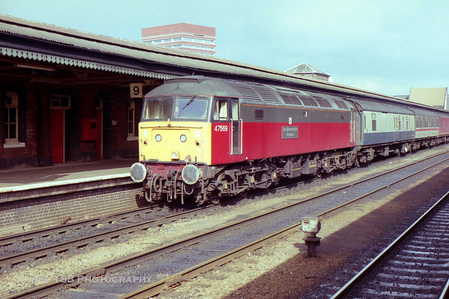 A locomotive still seeing regular use on the national network is
Colas Rail's 47727 Rebecca.

However, before it was reduced to just one of a handful of Class 47s left working for its living, in another life it was 47569 The Gloucestershire Regiment seen here at Reading working a west-bound van train. 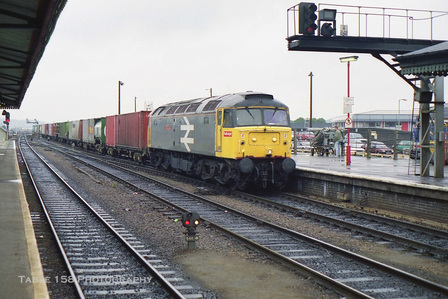 A purely rail freight example of the Class 47 was the sub-class 47/3 of which 81 were built with no form of train heating. 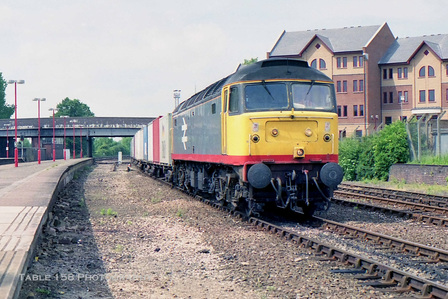 Creeping round the back of Banbury station is 47227 Banbury with the 11:25 Basford Hall - Southampton MCT freightliner working.

The addition of a red stripe to the lower body side made a colourful addition to the somewhat drab all-over grey livery which was applied to 20 members of the class. 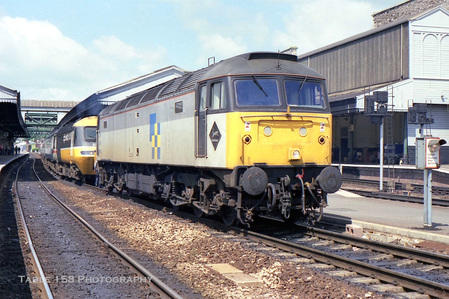 Here, the former George Jackson Churchward (latterly G. J. Churchward) is about to couple to 1V44 07:18 Newcastle - Plymouth at Exeter St Davids as it was running on a single power car and required assistance over the Devon banks.

4 June 1988
To leave a comment on this image click here
Contact
Click the button below to take you to the next GM Free page for more nostalgic images.
GM Free - Class 47 Golden Anniversary Part 2
All photographs are the copyright of Table 158 Photography and should not be
reproduced by an individual, or organisation, without prior consent.
©