Images from around my home county taken during 2013 will appear here. 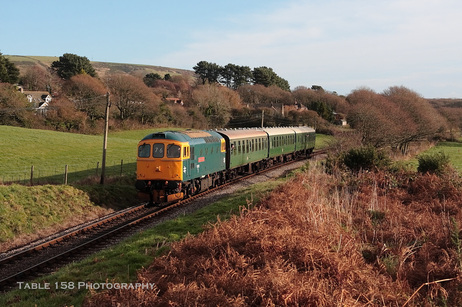 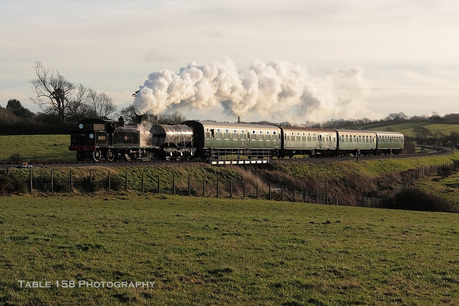 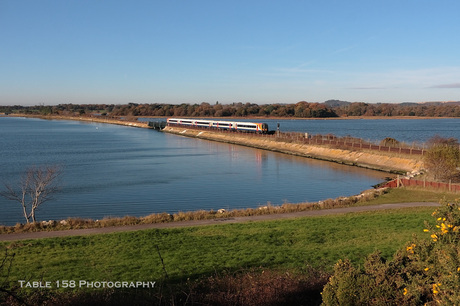 My local location - about a mile from home as the crow flies - and with weather like this, it was worth a short trek.

Passing over Holes Bay, on the approach to Poole, is this SouthWest Trains Class 444 working a Weymouth to Waterloo service. 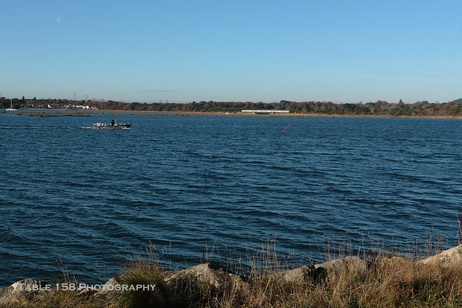 The small boat to the left says Fisheries Patrol on the side of the hull.

The moon is just visible to the top left. 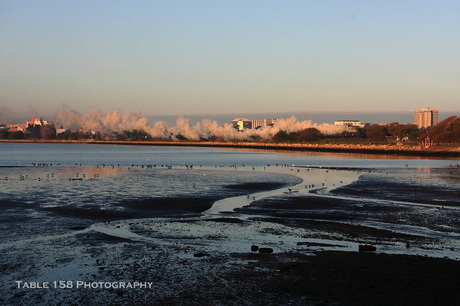 A very fresh start to the morning as 34067 Tangmere makes its ascent on Parkstone Bank past Baiter in Poole hauling 'The Christmas Cracker Express' 1Z92 07:25 Weymouth - Waterloo.

Although out of sight, to the rear 47580 County of Essex is providing some banking assistance up the 1-in-50 gradient.

While everything was working well, and going to time, all day, the locomotive was to suffer a major failure at Winchfield on the return.

The tour was duly terminated at Basingstoke over three hours late, passengers being forwarded on the last Weymouth-bound SouthWest Trains service of the day which was held for a connection. 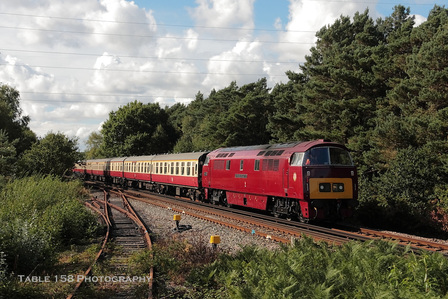 Not my first choice of location for the returning Western tour but, with my six year old son in tow, I had to settle where I was due to a lack of time to move from one place to another.

It was an afternoon of Russian Roulette - dodging the clouds and, more than once, pacing up and down like an expectant father - which, thankfully, ended with a hat-trick of rewarding shots.

Between the clouds, the returning 'Western Wessexman' tour, running as 1Z53 15:36 Weymouth - Leicester, storms past Winfrith Siding between Moreton and Wool. 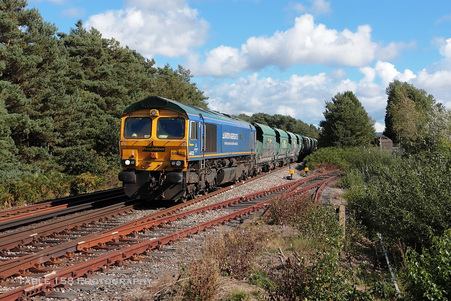 All is not as sunny as it seems, with huge clouds just to the south and a tense moment from my tree-top spot.

Just as the final wagon passed, it was lights out. Phew! 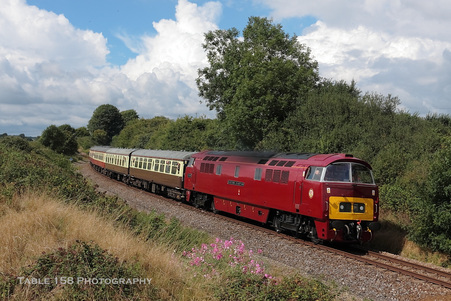 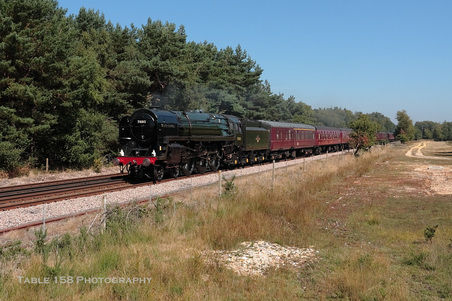 Ooops...I didn't take into consideration that colour of the backdrop and the livery of the locomotive until it was too late, better suited for a Network Rail yellow test train next time.

West Coast Railways Class 47 No. 47245 was the tail gunner for the return working as far as Southampton Central where Oliver Cromwell would then continue to Waterloo via Romsey and Andover. 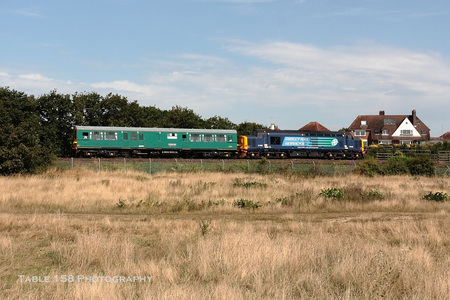 There were plenty of people out walking their dogs today so thought it might be nice to get some human, and canine, interest in the shot. Would you believe that no-one passed at the crucial moment? You can bet that if I didn't want anybody in the shot, there would be someone in the way.

Back in its ScotRail days, 37402 was probably better remembered for the name Oor Wullie after a Scottish comic strip.Former model railway manufacturer Lima also based one of its models on 37402 Oor Wullie in large-logo livery. 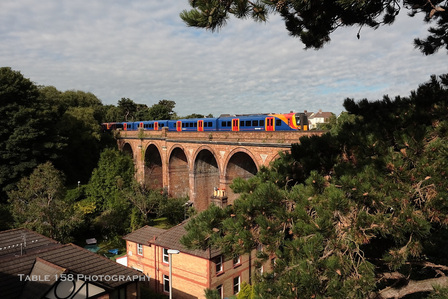 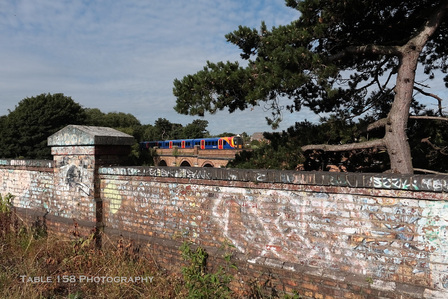 The third service on the trot worked by a Class 450 Desiro unit, the blue livery working really well at this location. 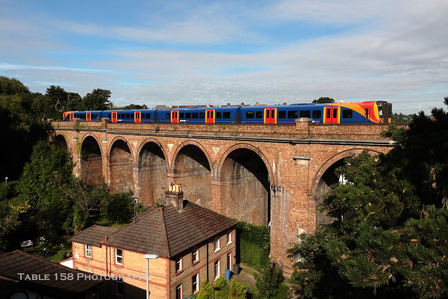 It is perhaps worth comparing the viaduct with this model railway (under construction) which features the Bournemouth to Branksome line, link here 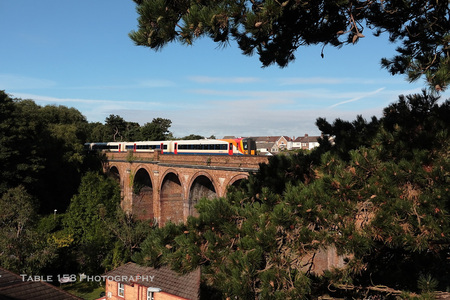 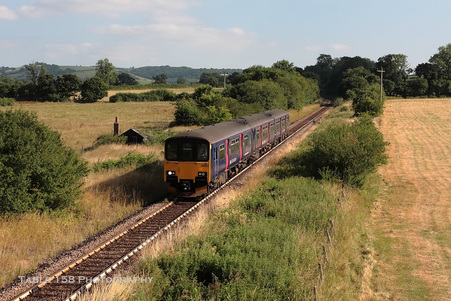 Summer Saturdays just are not the same anymore.

How times have changed for the traction on this classic line. What has
not changed, though, is the demand by the travelling public to travel to
the popular destination of Weymouth. 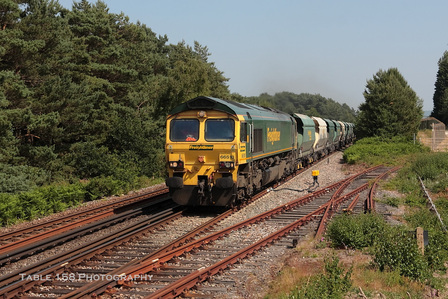 My kids thought it was most entertaining watching me perched up a tree, the wife less so, still i used to love climbing trees as a kid so not much has changed.

With the commissioning of new signalling from Parkstone to Moreton at the start of December, 2013, this train will no long operate west of Wool under normal circumstances. 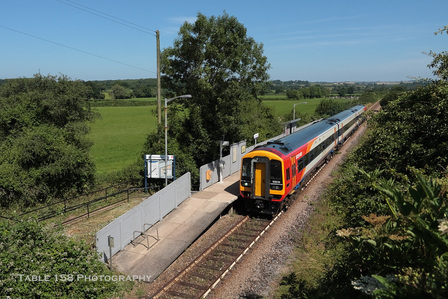 Slightly off the beaten track for 159016 as it passes Chetnole working 5Z93 08:12 Basingstoke - Weymouth (via Warminster and Maiden Newton).

This was for Fratton driver's route learning who will then work the MPV RHTT circuit during the autumn leaf fall season. 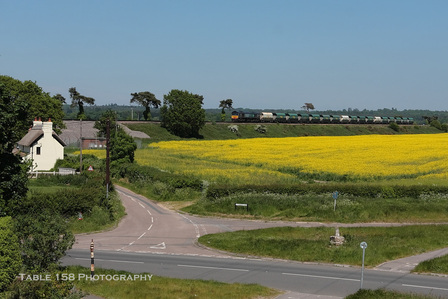 It has been a couple of years since the Wool sand empties have run on a Saturday but here DRS machine 66415 heads 6O49 10:51 Neasden - Wool (via Dorchester) along Christchurch Bank.

The field and other areas of land here are earmarked for development at some point in the future. 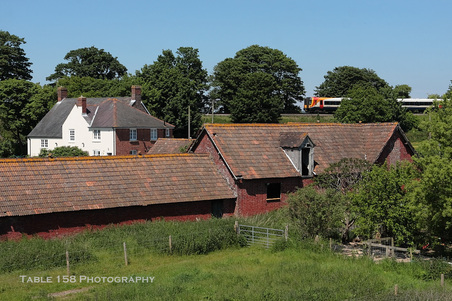 You can but wonder what the views along Christchurch Bank must have been like in BR steam days, both from the train and from passing trains,  before it became a near tunnel of trees. 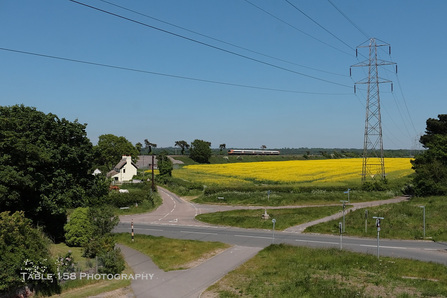 A perfect summer's day as a SouthWest Trains Class 444 'Desiro' unit heads along Christchurch Bank with a Waterloo to Weymouth service. 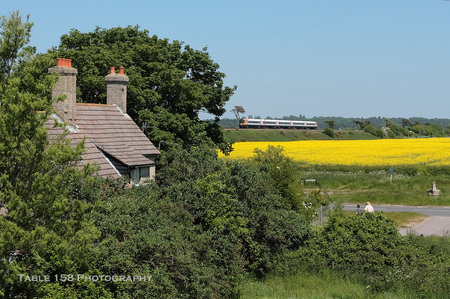 A 444 unit heads along Christchurch Bank on a fine summer's day at Stoney Cross. 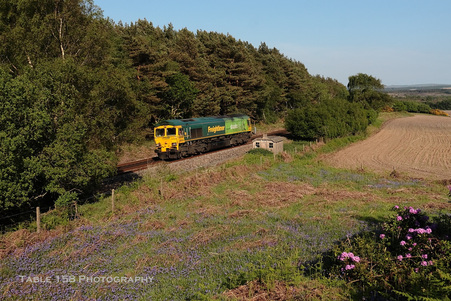 Page 11 of Dorset Steam, by Michael Welch, features an excellent shot taken here on  Friday 6 July 1967 - right at the end of southern steam.

Fast forward almost 46 years and the scene is almost unrecognisable as Dorset heathland has been transformed into Dorset woodland.

Passing the same spot as David Wigley's shot of 34036 Westward Ho in the book is Shanks-liveried 66522 running light engine from Wool to Dorchester to work 6W49.

With the advent of re-signalling, this working will become a thing of the past as the sand train will run round at Wool - under normal circumstances - making trips west of Wool to Dorchester a rarity. 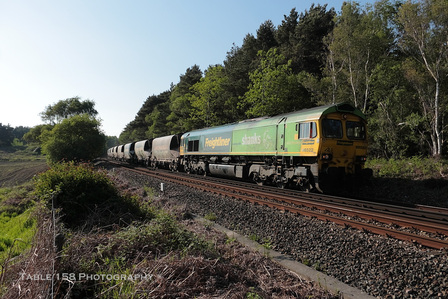 Having left a portion of the train in the sidings at Dorchester, 66522 continues back to Wool and is seen here , near Winfrith, with 6O49 10:51 Neasden - Wool sand empties.

The only location with any chance of getting the sun 'on the nose' for this working running back from Dorchester is about quarter of a mile behind the train but it is so overgrown these days that this is the best you can hope for at 17:48 on a summer's evening. 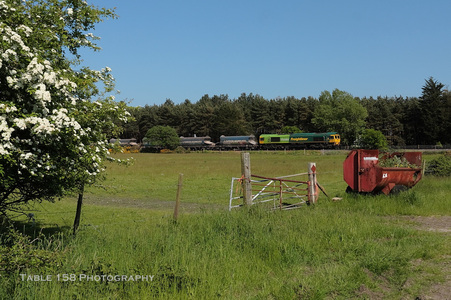 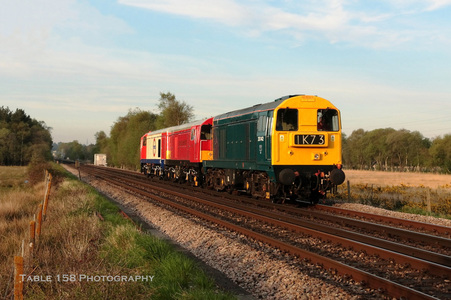 Don't you just love it when a plan comes together? Sadly, today was not that day.

20142 is also a late substitute for Peak D4 Great Gable which is unable to make the forthcoming Swanage Railway diesel gala.

This was not the shot I had quite planned to do, so more of a record shot. Not everything goes to plan.

7 May 2013
All photographs are the copyright of Table 158 Photography and should not be reproduced
by an individual, or organisation, without prior consent.
©